Ask any Realtor with a listing priced at $10 million or more, and they’ll tell you: they’re not just selling a house; they’re selling a lifestyle. For the kind of sophisticated buyers who can afford a home at that price level, it’s often necessary to paint a complete picture of what life will be like in the home – from the original art hanging on the walls to the brand-name designer furnishings and in some cases, the luxury car parked in the driveway.

“I received a call from the head of the Range Rover photography team in England who was scouting photo and video shoot locations for a VIP media drive event in Napa Valley for the all-new 2023 Range Rover,” recalls the 38-year Palo Alto-based real estate veteran.

That photographer was Nick Dimbleby, who has worked for Land Rover since 1997 and has been creating the photographic assets for media drives since 2001. Dimbleby has produced the photography for at least 20 new model launches for Land Rover, Range Rover and Jaguar, which have taken place all over the world from Scotland to Morocco. Knowing he needed a home within proximity to Napa Valley, he started searching online for appropriate properties in the San Francisco area.

“I was made aware of the home on Park Lane through a social media friend who owns property in the area,” he recalls. “I thought the home on Park Lane and its warm contemporary aesthetic were compatible with the minimalist style and modern luxury premise of the 5th generation Range Rover.” 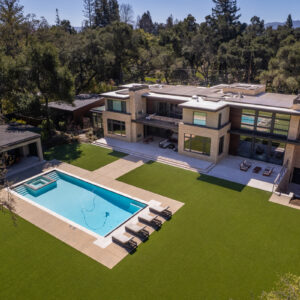 The home’s clean lines, sophisticated and understated aesthetic – as designed by reputable San Francisco firm, SDG Architecture – not only complemented the restrained elegance of the 2023 Range Rover, but it also aligned with the vision of chief creative officer Gerry McGovern who is a modernist architecture enthusiast. The house on Park Lane checked other boxes for Dimbleby, including having enough outdoor space “to allow the vehicle to breathe.”

“In other words, there needs to be room to allow the vehicle and the house to be photographed together, but not look as though they are on top of each other,” he explains. “The home on Park Lane has a large space outside the front which allowed us to capture the Range Rover and the property at an appropriate distance. If you look at the imagery, the vehicle and property sit comfortably with each other.” 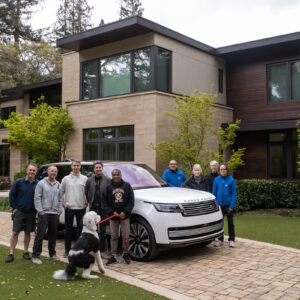 No stranger to luxury cross-promotion, Goldcamp was thrilled by the prospect of connecting her new listing with Range Rover. She quickly called her client – an entrepreneur and investor who had designed and built the custom home from the ground, up. “He was very pleased and flattered,” she said. “His wife had owned two Range Rovers. We both felt it was very fitting to place a designer luxury car in front of a custom-designed house of this caliber. Both parties have thought of everything – from the elegance in design down to creature comforts and technology.”

Indeed, the three-story 11,356 square-foot Atherton home is a triumph of modern luxury design – much like a Range Rover, which has long been celebrated for its breathtaking modernity, extravagant features, and state-of-the-art systems. 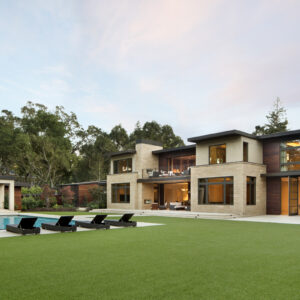 Built by Lencioni Builders in 2015, the residence blends the aesthetic beauty of warm modernism with state-of-the-art technology, eco-friendly features, and a dynamic floorplan with multiple entertaining spaces that connect seamlessly to the outdoors. (Even the fully-equipped guesthouse offers a glass wall opening to a large covered terrace.) 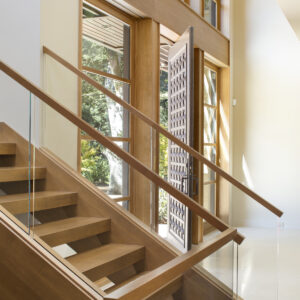 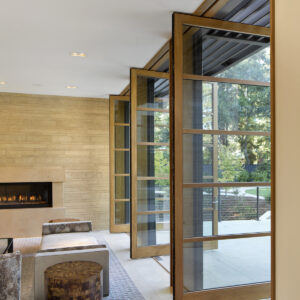 Creature comforts are many: an allergen filtration system, full smart home automation, an elevator, two family rooms, two laundry rooms, a lower level entertainment space with bar, gym, and home theater, plus a garage with EV charging that can fit up to five cars. And of particular note are the home’s 92 solar panels allowing the homeowner to have a low carbon footprint. “Everything is top of the line,” says Goldcamp. “No detail was spared in its design or construction.” It’s the kind of home where one “can totally imagine a Range Rover being parked outside,” adds Dimbleby.

On March 28, Dimbleby led the photo and video shoot at Park Lane. The Napa Valley media drive event took place over the course of the next three weeks. About 400 VIP media guests and social media influencers had four different models to test-drive: a short wheelbase and long wheelbase, petrol, hybrid, and diesel models (the latter for European markets only). With prices starting at $104,500, the Range Rover is available with electric hybrid and mild hybrid options. A fully electric Range Rover will join the family in 2024. 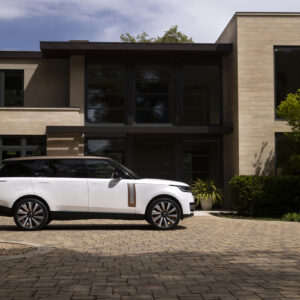 Car and Driver’s Henry Catchpole called the new SUV “deeply impressive.” He could have easily been talking about the architectural stone wonder rising behind the vehicle parked in the driveway and the lifestyle awaiting its future owner.