Back in the 1950s, Antenor Patiño was one of the world’s richest men, having amassed a fortune as heir to his father’s tin-mining business. So like any hedonistic multi-billionaire, he built himself a summer vacation home.

Only Señor Antenor went a little overboard, constructing a spectacular 36,000-square-foot, 14-bedroom palace on a hill high above Cascais, near Portugal’s capital Lisbon. He dubbed the place Patiño Palace, and filled it with jaw-dropping amenities like a bowling pavilion, a Roman-sized swimming pool, a Hollywood-style screening room, a romantic tea house and a library inspired by the UNESCO World Heritage-listed Biblioteca Joanina at the University of Coimbra.

Of course, Antenor and his wife Beatriz also threw magnificent parties here. Their legendary “Party of the Parties” in 1968 had over 1,000 invited guests, including A-listers like Audrey Hepburn, Zsa Zsa Gabor, Henry Ford and a who’s-who of Rockefellers, Rothschilds and Niarchoses.

Now, 39 years after Patiño’s death, his astonishing palace is on the marketfor an equally astonishing €23 million, or roughly $26.5 million. 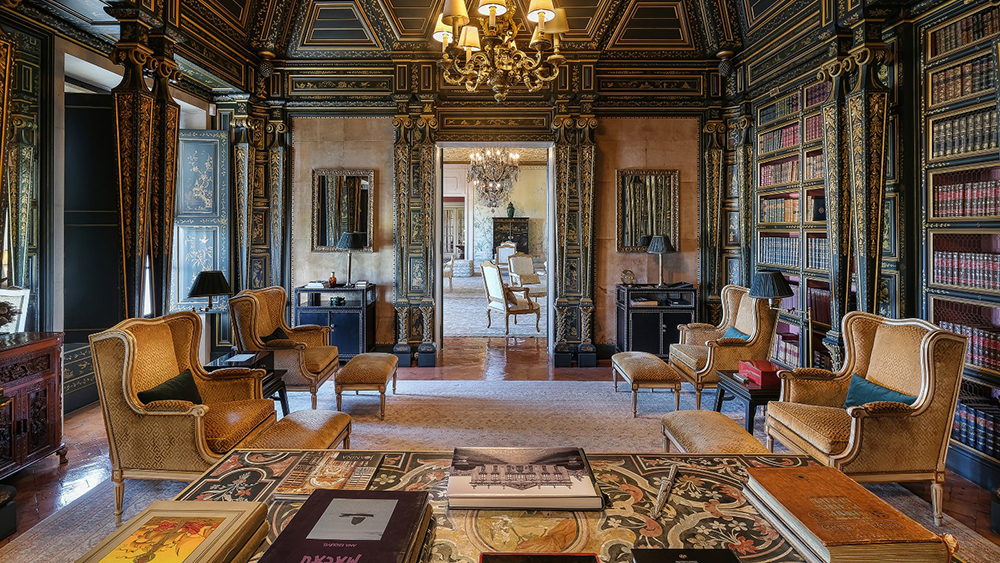 “Nothing comes close to describing just how magnificent this property is. It is a true palace fit for royalty,” Macarena Osorno, listing broker with Portugal Sotheby’s International Realty, tells Robb Report.

According to Osorno, you’d be forgiven for thinking the place was built in the 1700s, not 1957. The main house, with its stunning barrel-tile roof and imposing arched facade overlooking ornate, manicured gardens, was inspired by 18th Century Portuguese architecture. Inside it’s all soaring carved-wood ceilings and walls decorated with frescoes and hand-painted tiles dating back to the 17th and 18th centuries.

“There is a real museum-quality about the house. Strolling through the rooms is like stepping back in time. There are not enough words to describe how impressive it,” she adds. 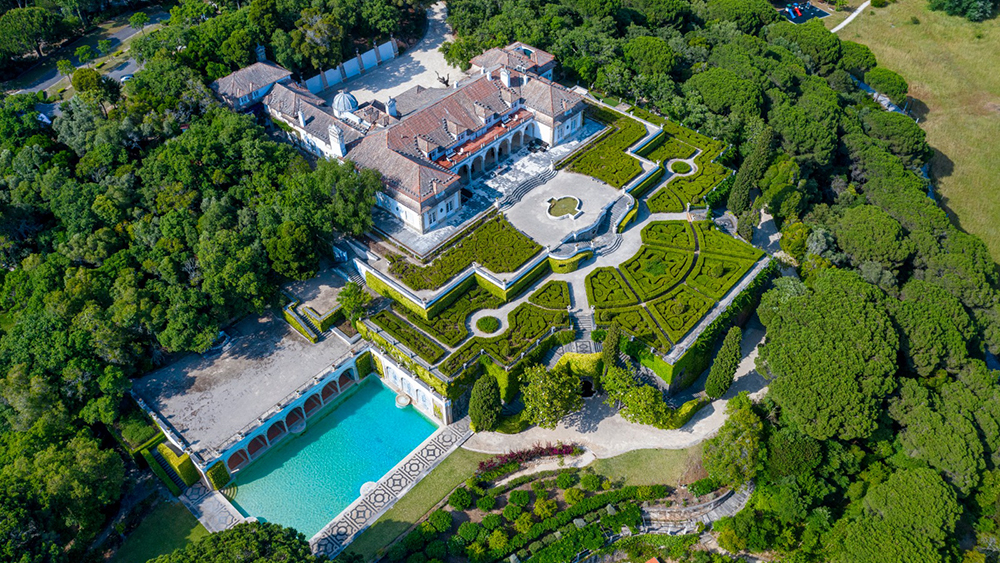 Patiño fell in love with the hills around Estoril, 20 minutes south of Lisbon, back in the early 1950s after visiting a well-to-do friend. He found a 124-acre farm on a hilltop overlooking the Atlantic Ocean to build his dream palace. At the time, Patiño had multiple homes around the world, including a sprawling town house on New York’s Fifth Avenue and a nearly 28,000-square-foot mansion on Paris’ famed Avenue Foch. In 2010, the latter would list for $140 million, making it the second most expensive residential property in the world at the time.

Following Beatriz Patiño’s death in 2009, the palace was acquired by a local bank and all but 7.6 acres of land around it were sold to developers to create Quinta do Patiño, a super-exclusive, super-secure gated development of 93 homes and 55 apartments. More recently, the palace was bought by a large corporation that has been using it as a company retreat and private conference center. 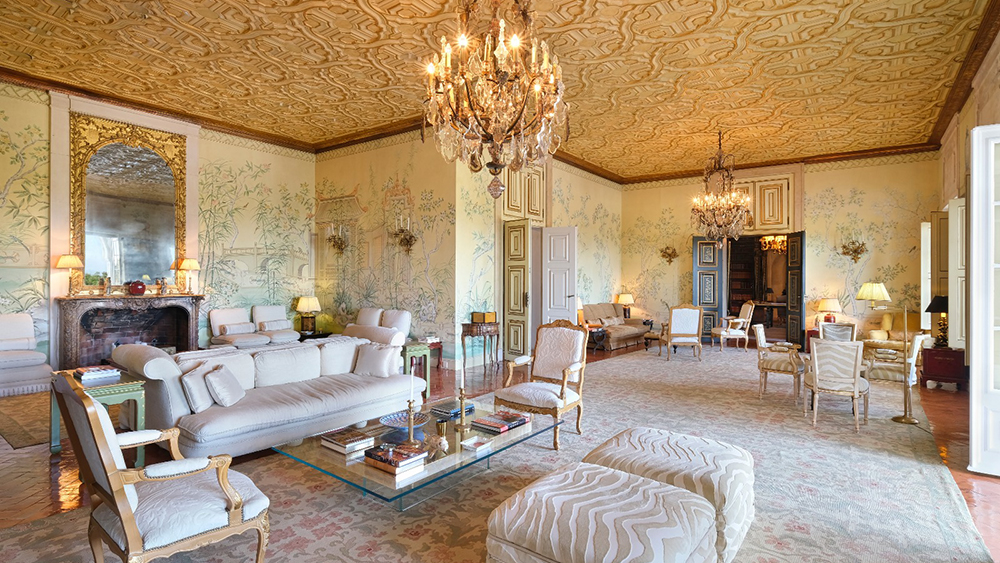 Spread out over three floors, the main house features a stunning double-height entrance hall with arched ceilings. A grand marble staircase leads up to an elegant balcony with hand-carved stone balustrades.

On the first floor, the majestic, wooden-ceilinged dining room is lined with hand-painted frescos, as is the Chinese-inspired reception room, while the wood-paneled “Joanina” library needs to be seen to be believed. This floor also holds two giant bedrooms with living rooms that, according to Orsono, could each be used as a master suite. (We’d take the one with the ceiling fresco and four-poster bed.) Another 12 ensuite bedrooms can be found on the second floor. 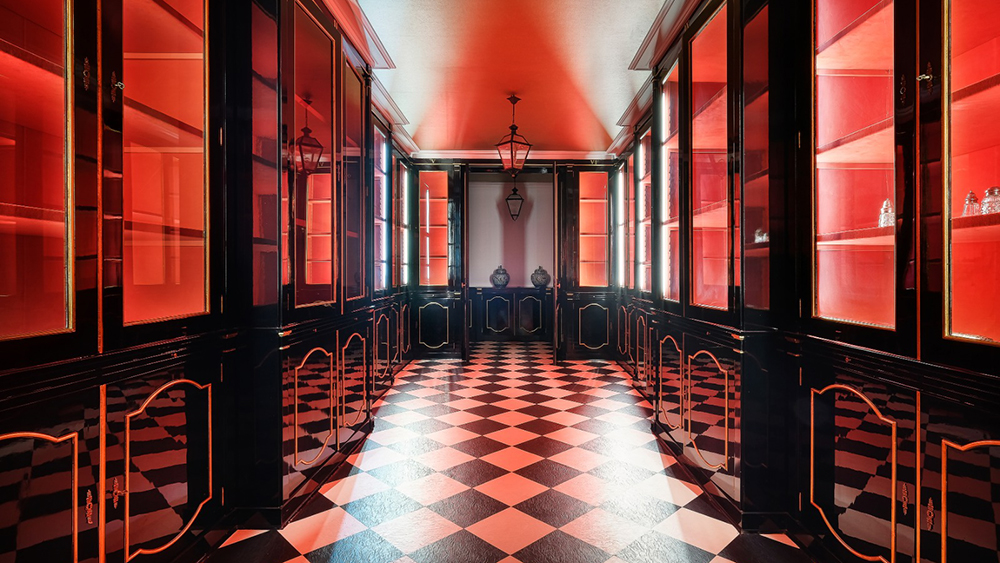 From the first floor, take the long staircase lined with traditional hand-painted blue Portuguese tile down to a vast subterranean lower level. Here there’s a huge entertaining area and a cinema room with its original Hollywood-style projectors. As Beatriz Patiño was well-known for her stunning jewelry, she had a safe room built to store her gems. You’ll find that here, too, complete with its bank-vault-style door and rows of glass-fronted display cabinets bathed in red light.

Outside, in a stand-alone, ivy-covered pavilion, is the elegant bowling alley that still has its original electric Brunswick workings. Back in 1973, Architectural Digest devoted a four-page story to it. Osorno reckons it would make the perfect fitness room and spa. Another stand-alone pavilion close to the pool was designed for Beatriz Patiño to enjoy an afternoon cup of tea. It’s peppermint paneled walls and ceiling could be straight out of Palm Beach.