When United Airlines announced earlier this month that it had made a deal to purchase 15 airliners still under development from Denver-based Boom Supersonic, the airline became the latest entity to place a bet on one of aviation’s sexiest and most quixotic propositions; flight that is faster than the speed of sound and affordable to the masses.

Opinion is mixed on the feasibility of supersonic commercial flight in the near future. But one of the concept’s biggest boosters, Boom’s CEO, Blake Scholl, insists the goal is achievable. “We get as much speed as possible, for as many people as possible, to as many places as possible, as quickly as possible,” he told Robb Report.

Scholl is enthusiastic because we’ve already been there. Boom’s demonstrator aircraft, the XB1, and its bigger sibling the commercial jetliner, Overture, are leveraging technology from the days of the Concorde, “rather than starting from scratch,” he said. Scholl expects the Overture to be certified by 2029 and take its first commercial flight in 2030.

VIEWING
The Incredible Story of the Bugatti In The Lake
Car of the Year 2021: Countdown
The Myth of Vincent Motorcycles' Black Lightning 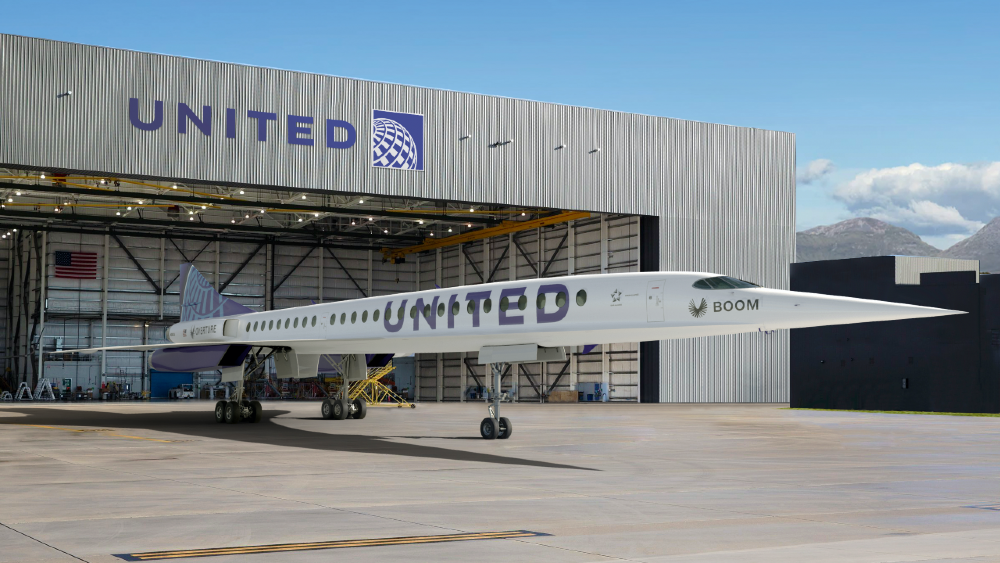 It was nearly half a century ago that British Airways and Air France flew the Concorde across the Atlantic in half the time of subsonic airliners. Fourteen of the droop-nosed, European-made SST’s continued in commercial service until 2003. Before the Concorde there was the Russian-built Tupeluv 144D. Two fatal crashes—one in 1973 at the Paris Air Show and another in Russia in 1978—spelled the end of that airplane. The few remaining are housed in museums where they still fuel a yearning to fly tomorrow on newer versions of these artifacts from the past.

If there is to be a new generation of supersonic jetliners, success is inextricably tied to how well their creators can navigate through the obstacles that plagued the Concorde.

These include the sonic boom, the noise created at the speed of sound threshold (Mach 1.0 or 767 mph) which prevented supersonic flights over land. Then there is the copious fuel consumption and carbon emissions of supersonic flight. When weight is everything, the limited passenger-carrying capacity and scaled-down cabin interior could make it difficult to sell enough tickets to make SST flights profitable. Finally, there is the need for regulatory approval using standards that do not yet exist, from dozens of governments. 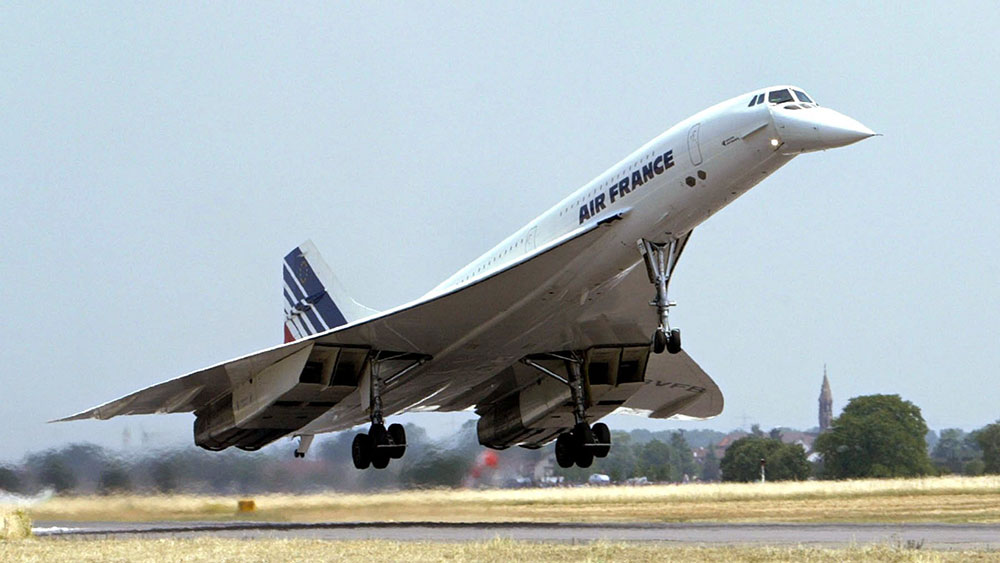 The last Concorde lands in Germany in 2003. The aircraft proved that supersonic flight was possible, but with challenges like limited interior space, sonic booms and heavy fuel burns. Photo: Uli Deck/picture-alliance/dpa/AP Images

These issues populate the to-do lists of the SST engineers. Boom, with its plans for a 40- to 50-passenger airliner, touts its planned use of biofuels like sustainable aviation fuel, as does California’s Exosonic, with its 70-passenger jetliner. Boston-based Spike Aerospace is focusing on an 18-passenger business jet with a proprietary technology it claims will keep the sonic boom at the level of vacuum cleaner. It recently received FAA approval for limited testing of its design over land.

Norris Tie, CEO of Exosonic, says before his company produces its airliner, it will move incrementally towards refining its technology with a small research contract it has with the U.S. Air Force. It recently announced plans to develop an Air Force 2, a supersonic jet for the vice president and cabinet-level officials.

“That helped put our company on the map for supersonic aviation and benefited us by letting us grow, hire people and do wind-tunnel testing that’s been really helpful,” he said of the work being done on a supersonic government personnel aircraft. 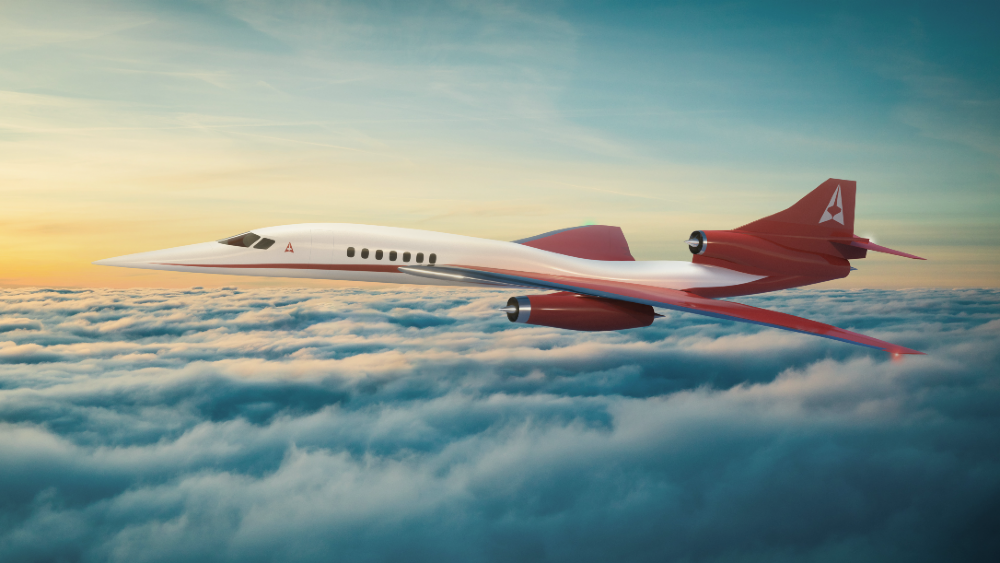 The poster child of supersonic flight, Aerion had been working on a supersonic jet for almost two decades, but ran out of cash in May. Courtesy Aerion Supersonic

Even small government contracts offer companies bragging rights and insight into research and regulatory agencies.  In March, Subaru, Mitsubishi Heavy Industries and several other companies formed Japan Supersonic Research with a goal of having an SST passenger jet by 2030. They partnered with the Japan Aerospace Exploration Agency and have access to JAXA research going back to 1997.

“No single nation can develop supersonic transport on its own, since this requires an enormous amount of capital and the integration of many advanced technologies,” Dr. Takashi Ishikawa, director of the space agency’s aviation program, wrote on the government website.

To deal with noise, fuel inefficiency, and the many other significant technical issues, what every aspiring SST maker needs most of all is money. 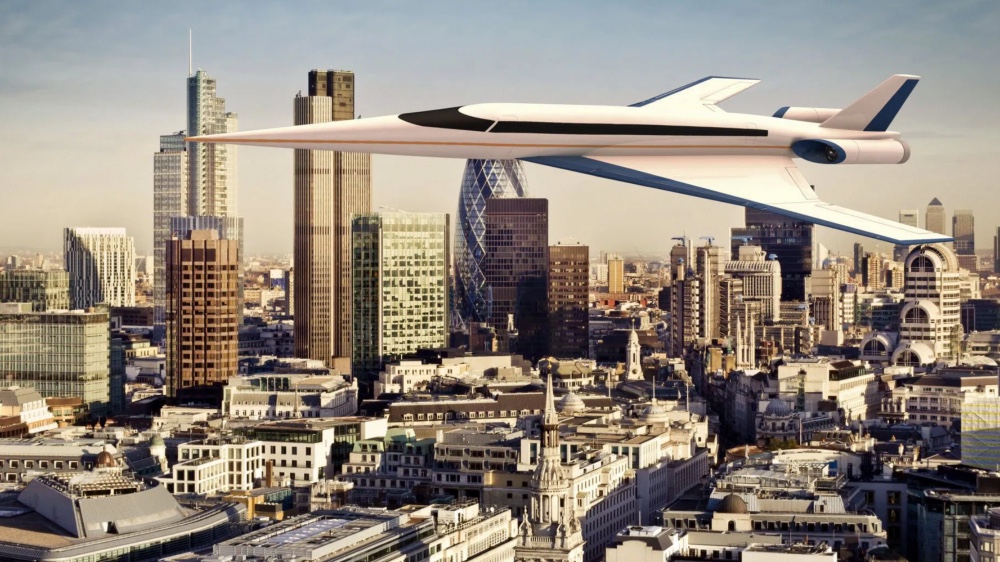 Spike Aerospace says it will neutralize the sonic boom on its 18-passenger business jet so it can fly to cities like London. Courtesy Spike Aerospace

“The only thing that matters is cash and so far it isn’t there,” said Richard Aboulafia, an aviation consultant who publishes the widely distributed Teal Monthly Aircraft Letter.

Government contracts of one or two million dollars are meaningless, he said. “The funds we’re talking about are incredibly trivial in the world of aerospace.”

Reno-based Aerion Corporation is a case in point. In May, it issued a stunning announcement. After nearly two decades of working on a supersonic business jet, it said it was shutting down. It had a plane that could fit seamlessly into airports, an engine deal with GE and an operational procedure that it claimed would allow the plane to pass through Mach 1 soundlessly, though not necessarily consistently. It had purchase commitments totaling $11 billion from FlexJet and Netjets. It had a partnership with Boeing. It had a plan to launch its first commercial flights by 2026. What it did not have was money. 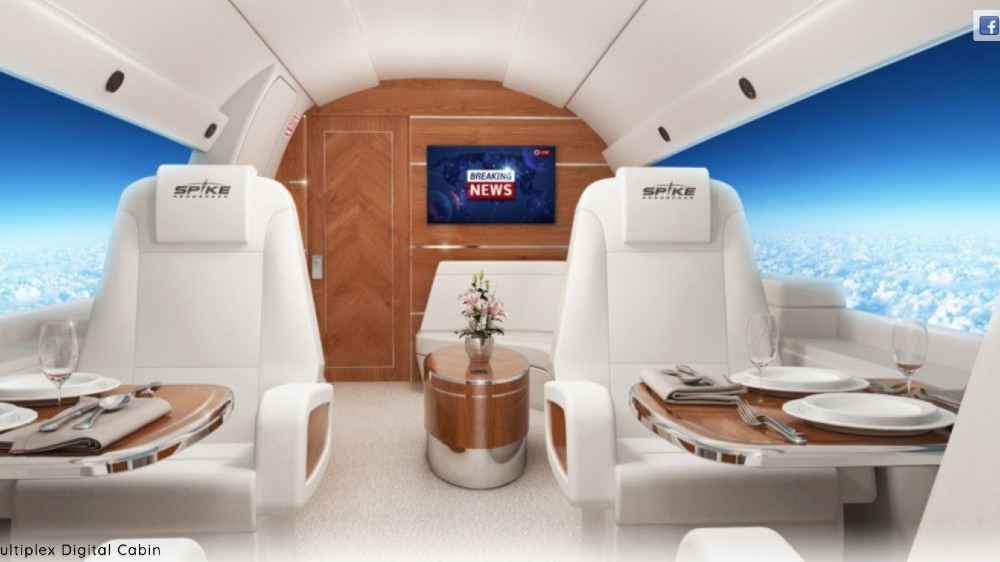 The S-512 has a lavish business-jet interior designed to compete with first-class cabins. Courtesy Spike Aerospace

“It tore my heart out,” said Steven Berroth, who joined Aerion in 2018 and was senior vice president of operations when the announcement was made. “It was three years of my life, it was 170 employees, their livelihoods and their dreams. It is a terrible outcome.”

“They had put together amazing talent,” said aviation consultant Rollie Vincent, who did work for Aerion. “The number of PhDs per square foot was off the charts,” he said. “But they weren’t building things, they were trying to refine design and purify aerodynamics. At some point, everybody, including investors, want to see parts.”

That is the route Boom Supersonic took. It spent $150 million, more than half of $270 million it raised, building the XB1 demonstrator dubbed “Baby Boom.” Though Baby Boom’s design may be unrelated to the Overture jetliner sold to United and Japan Airlines, just having something to fly enhanced Boom’s profile. Still, to build Overture, it needs investors willing to fork over $6 to $8 billion. 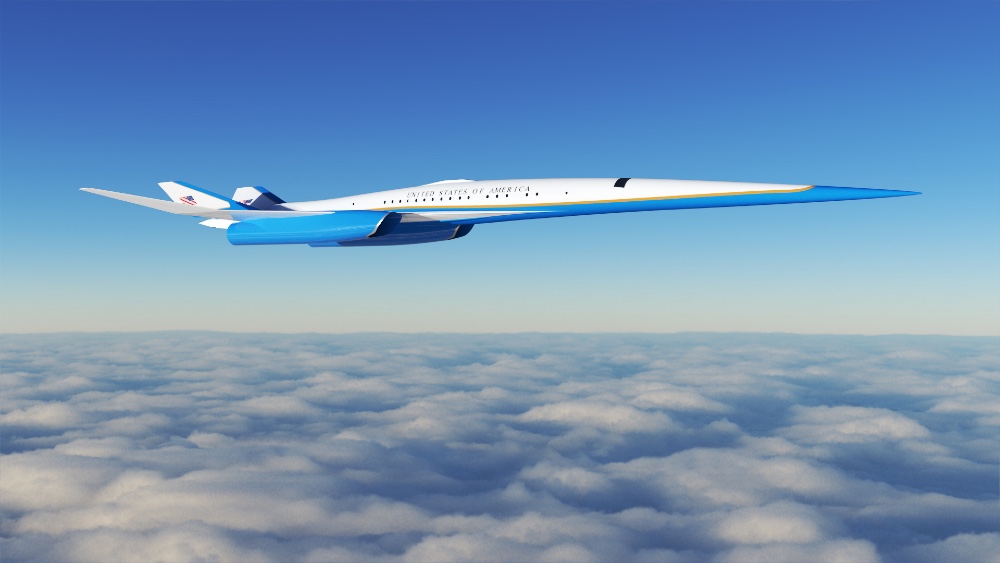 Exosonic is working with the US Air Force to develop a supersonic jet to transport the US vice president and cabinet-level officials. Courtesy Exosonic

“It is absolutely obtainable. Think about the investment required in relation to the size of opportunity,” Scholl explained. An investment in Boom, he says, is a billion-dollar investment for a multi-billion-dollar payoff.

Not everyone is so sure that business-class travelers will beat a path to a supersonic airplane. Noting the enormous improvements in premium cabins today, the wide seats and privacy pods, Aboulafia wonders if cutting flight time in half is worth the step down in comfort.

“Why are you rushing? Why are you paying such a big premium?” he asks. “You won’t have a lie-flat bed or that fantastic screen. You’re not going to have all that.” 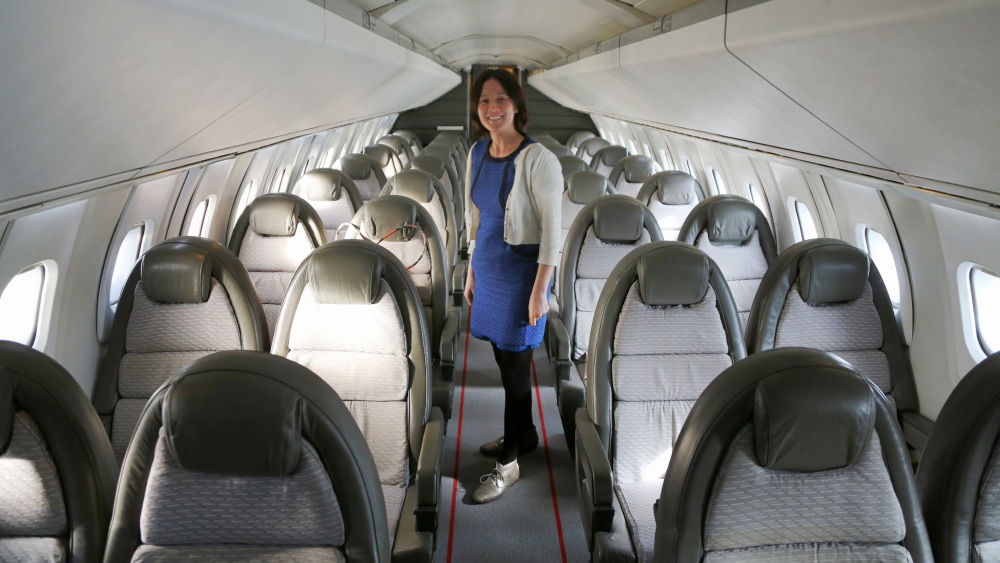 While functional, the Concorde’s interior is barebones compared to today’s business-class cabins. Courtesy Jetlinercabins.com and Spiritofconcorde.com

Jennifer Coutts Clay, who was British Airway’s Controller of Corporate Identity when it was operating the SST, has photos of the Concorde interiors in her book, Jetliner Cabins. While not exactly spartan, she describes the environment as similar to today’s premium economy. But what she says is more important than seat size is VIP service and faster movement through the airport on arrival and departure.

“Who wants supersonic if we’re going to be stuck at the airport for 3 hours before and 2 hours after and the distress that you get in a normal airport? There is a need for a new handling procedure,” she says. This is her message to aircraft manufacturers.

Even so, SST developers say supersonic air travel is the inevitable next step. And even among skeptics, there is a sense of nostalgia for the Concorde-era’s age of innocence, what Rollie Vincent called a “time of infinite possibilities.” Innovation was wholeheartedly accepted with an obliviousness to the environmental consequences. 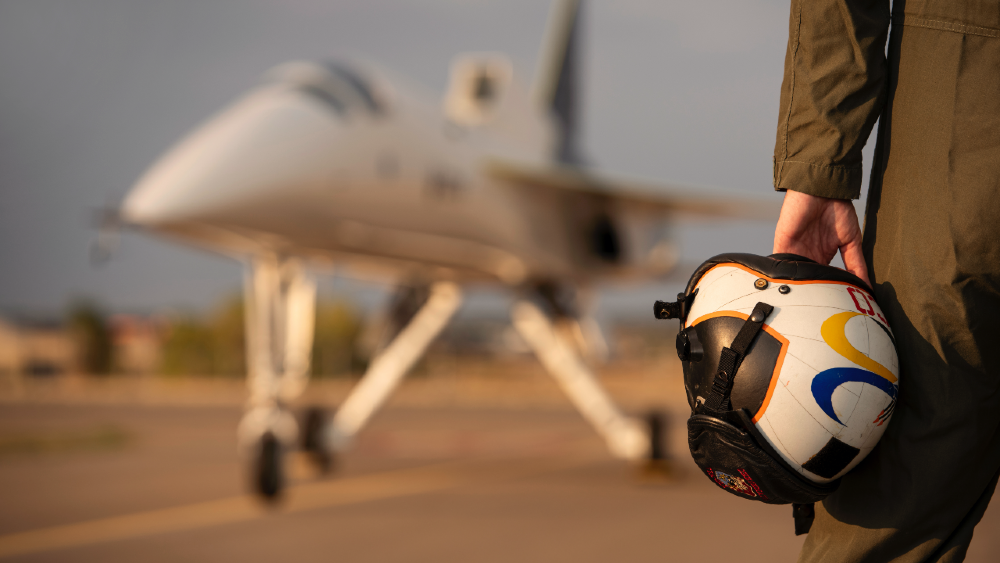 “Suddenly, we started embracing the notion so that we might have to take care of the planet,” Vincent says, adding that he thinks today’s aeronautical engineers are up to the task.

The proponents of SSTs claim to be conscious of the impact of their products, though, and solutions are a lot more complex than just switching to biofuels. SSTs will have to do what the Concorde did not—meet global fuel-efficiency standards. This could be difficult, according to the predictions of environmental scientists Anastasia Kharina and Tim MacDonald, who write in a study for the International Council on Clean Transportation that “commercial SSTs could be three times as fuel intensive per passenger as comparable subsonic aircraft.”

“We’re making sure we’re not going to make the problem any worse than it is,” Exosonic’s Tie told me. “There are no answers today, but those are issues we want to work to make sure our aircraft is as environmentally friendly as possible.” 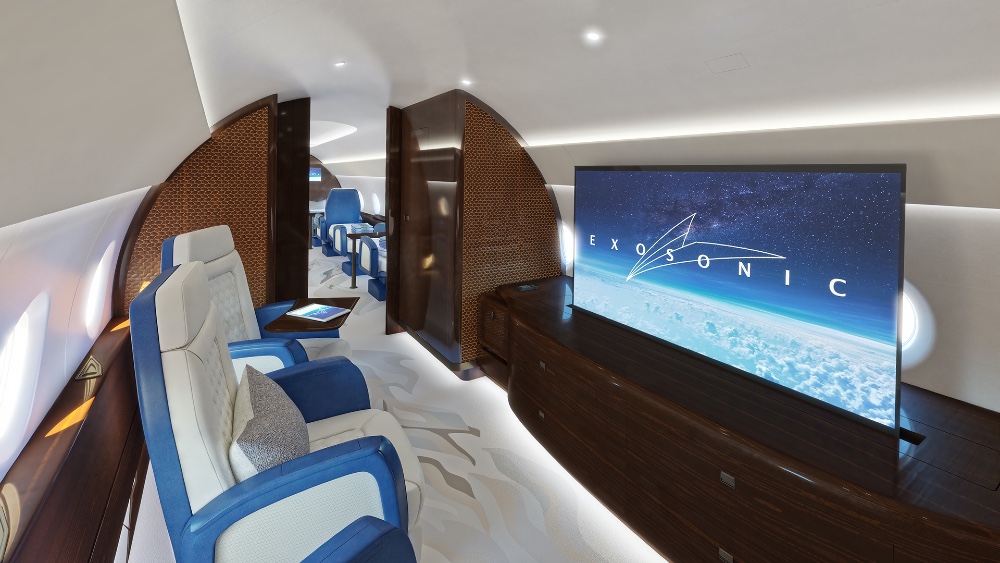 When I asked a knowledgeable insider just how likely SSTs were to fly in the near future, he replied that one must strip away the aspirations and look only at the current capabilities. Then, he said, it is clear a revival of supersonic flight now is inconsistent with the huge challenge of climate change.

Supersonic flight “looks like it should be a thing,” Aboulafia told me. “Aviation insiders, writers, and the Richard Aboulafia’s say, ‘Wow, wouldn’t it be great if…’ but don’t scratch too deeply.”

That said, the companies that have raised millions and staked their brand names on faster flight, have presumably scratched deeply enough to have seen supersonic’s potential. Will it happen? Watch this space.